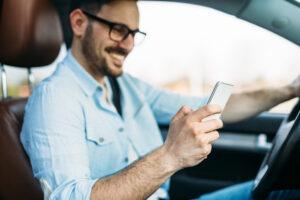 As a personal injury law firm, we see these statistics come to life. So many of the fatal or seriously harmful accidents that we deal with could have been prevented if drivers committed to safer driving habits. So what is the truth about using your cell phone while driving? Is it really unsafe? Is it really negligence? Let’s look at the facts reported by CODOT, Driver’s Alert, and NHTSA.

What Can You Do?

These facts and statistics are staggering. Whether you’re a truck driver or commuter, you have the ability to change the statistics. The only way to really make the roads safer is for drivers to take the responsibility of adopting safer driving habits. What can you do? Share the information about the negative impacts of cell phone use while driving, and commit to being a safe and alert driver yourself! Don’t believe the lie that you are “better” at texting and driving than someone else! Everyone is susceptible to the deadly distractions of cell phone use while driving.

Have you or a loved one been injured in a car or truck accident in Jackson, MS because of another driver’s negligence? Negligence can include the irresponsible use of a cell phone while driving. The Heilman Law Group is here to get you the compensation you’re entitled to. Let’s get started today. Call 601-914-1025 or contact us online.