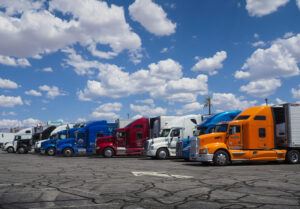 In 2017, there were 4,761 people killed in crashes involving large trucks in the United States. According to the IIHS, 11% of all motor vehicle crash deaths in 2017 occurred in large truck crashes. As experienced personal injury attorneys, we’ve dealt with many accidents involving large trucks. By consistently sharing facts and information, we’re hoping to help decrease crashes and related injuries in Jackson, MS for drivers of cars and trucks alike! The following stats gathered from the NHTSA may surprise you, and hopefully will help all drivers proceed with increased roadway safety.

#1: Car Occupants are the Most at Risk

In 2017 crash data involving large trucks, 72% of the fatalities (3,450 people) were occupants of other vehicles such as cars.

Most people might think that interstates are more dangerous when it comes to truck accidents. But while 1 out of 4 fatal large-truck crashes (27%) occurred on interstates, 58% of fatal crashes involving large trucks occurred in rural areas. Stay alert, even when you’re out of the fast lane!

Only 5% of fatal crashes involving large trucks occurred in work zones. Respect the construction zone speed limits, they’re there for a good reason!

#5: Weekdays are the Most Deadly

For other driving hazards such as drunk driving, weekend nights are the most dangerous. But when it comes to truck accidents, normal work week hours hold the highest potential for fatal crashes. 78% of fatal crashes involving large trucks occurred on weekdays in 2017. Of those weekday large-truck fatal crashes, 72% occurred during the daytime hours of 6 a.m. to 5:59 p.m. Don’t let down your guard during your routine commute – pay special attention during these prime accident hours.

#6: Most Fatalities Happen While Driving Straight

Sharing facts and information about roadway safety can help, but accidents still happen. If you or a loved one has been injured in an accident involving a large truck, it’s important to work with a skilled personal injury attorney so that you can understand your rights and the compensation you’re entitled to. Let’s get started today! Call 601-914-1025 or feel free to contact us online!